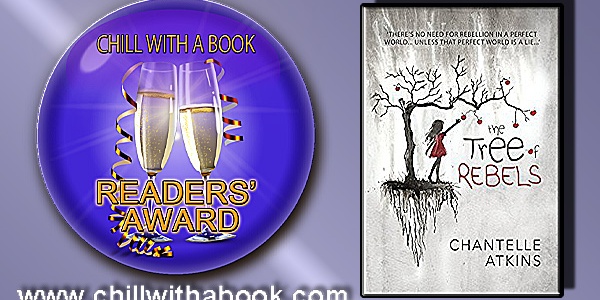 I just thought I would share the good news with you guys, that The Tree Of Rebels has won a Chill With A Book Readers’ Award! (check out the awards here)

I’ve entered a few awards here and there over the years, but this is the first time I have won anything, so I am obviously thrilled to bits!

The Tree Of Rebels came out in August 2017. It took me two years to write and regular readers of this blog will know that I had a real love/hate relationship with it at times. It has been really well received since its release. It was voted 12th in Amy Shannon’s Top 20 Indie Books of 2017 and it also made it into the My Top Ten Books of 2017 by book blogger Jules at LittleMissNoSleep Daydreams Of Books blog.

I was extremely surprised and overwhelmed by all of these. I’ve blogged many times about how up and down the life of an indie author is. It’s recognition like this that keeps you going. Support from other authors such as the wonderful Amy Shannon who does so much to highlight indie books, and devoted book bloggers such as Jules who take a chance on indies like me, really does mean so much. It’s impossible to do this alone, so you really do need these people around you! To start 2018 with a Chill With A Book Award is really thrilling. It has given me a much-needed boost of confidence.

And now, back to the writing!

Have you dived into the Holds End trilogy yet? It ties into The Boy With The Thorn In His Side universe but focuses on three teens trying to solve the murder of a local teenager, whilst struggling with dysfunctional families and their own sexuality. #extract #snippets #novel #fiction #yournextread #yournextbook #youngadult #YA #YAfiction #yatrilogy #youngadult
Getting through the 4th draft of my The Boy With The Thorn In His Side spin off book, At Night We Played In The Road. Really enjoying it actually. I have definitely been able to be more ruthless with cutting the word count down on this go through. It will be interesting to see how many! #amediting #workinprogress #wip #editing #edits
Love this review from @mjm_reviews for Bird People and Other Stories! They're all dark gritty stories if you like that sort of thing! #bookreview #review #shortstorycollection #shortstories #darkstories #grittystories
Looks like the freezing temperatures are with us for the week ahead too. I don't mind the cold too much, its the ice I could do without. This is our lane and parts of it are pure ice. And I'm so desperate to get in the garden and work on my patch, I was really hoping it would warm up a bit this week.
Whoo hoo, just finished the 3rd draft of At Night We Played In The Road, which is a spin off book from The Boy With The Thorn In His Side series. I've now sent it to my kindle for the 4th draft which I'm really looking forward to. It always feels different reading it and making edits on a kindle. I still need to get the word count down too. I only managed to shave off 1000! I'm hoping the read through on kindle will alert me to any scenes that are slow or unnecessary so I can be more ruthless on the 5th draft! #amwriting #amediting #wip #workinprogress #
Another beautiful sunny icy morning! School run was a bit scary again. But once I was home it was straight out with these beauties to wander in our favourite place. A day of writing ahead of me! #writingday #fridaymood #Friday #dayoff #walking