Writing the first draft of a novel (as I am doing right now) is wonderful and scary and full of surprises. There is nothing quite like the exciting moment you first put down words to see where they go. Also, if you have been spending a lot of time revising and editing, writing something brand new and fresh, is just glorious. If you’ve had to push back ideas and ask noisy characters to wait their turn patiently, finally starting that first draft is just about as exciting as it gets.

However, the first draft is also tricky. It’s entering unknown territory. You may have a plan and a plot, but things change, things happen. Sometimes the characters take over and throw constant spanners into the novel you had envisioned! It is also a draft full of self-doubt. Is this working? Is this rubbish? Then there are the bits that drag. It’s slowing down, what do you do? 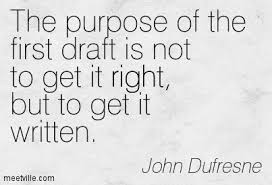 Writing your first draft is an exhausting, nerve-wracking business. Compare that to the frustration and tedium that sometimes accompanies the third, fourth or fifth draft, and you might understand why the second draft of a novel is my absolute favourite. Here is why!

How about you? Which draft do you enjoy the most? Which one is the worst or the hardest? Please feel free to comment and join in the conversation!

One Toothbrush – A Tale of Days Gone By

The Most Important Writing Rule

Sneaking a bit of writing in while my littlest watches Teen Titans Go. This is my August writing challenge story. I'll post it on my blog at the end of the month! #amwriting #workinprogress #writing #shortstories
Finished this one today. An apocalypse story with a twist! It was not what I was expecting! Enjoyed the story and the characters #reading #amreading #toreadlist #books
JJ has problems even before a strange dark mist starts changing him from the inside. Was his mother crazy? Dangerous? And is he about to go the same way? Or is something even stranger going on? Hangman's Revenge is the first book in the mysterious Fortune's Well trilogy and is available in ebook, paperback and hardback! #bookquote #bookextract #snippets #extract #sneakpeek #ya #YA #YAfiction #comingofage #familydrama #firstlove #YAparanormal #YAsuperpowers #YAsupernatural
Extracts from last weeks blog post which was all about motherhood and letting go. How one day it'll be just me living alone with one of everything, just like my mother. Link to blog in bio! #blogging #writingblog #blog #writing #amwriting #motherhood
Hangman's Revenge, the first book in the YA paranormal trilogy is out now in ebook, paperback and hardback! JJ is a loner, misunderstood and mistrusted, he feels his family is cursed. As a strange mist starts to change him from the inside, only an unlikely friendship with the popular Darcie can save him... #extract #snippets #quotesfrombooks #yaquotes #yournextread #yournextbook #fiction #YA #YAfiction #yatrilogy #YAsupernatural #YAparanormal #YAsuperpowers
Rain at last!! Proper rain... And some distant rumbles of thunder