They say that owners end up looking like their dogs. Or maybe it’s that people subconsciously choose dogs that look a bit like them. I can’t say I look like my dog Skipper, sadly. He is tall, slim and blonde. I’m…not. However, we are very alike in a lot of strange ways. Today’s blog is all about me and my dog, and why we are so totally and utterly suited to go through this life together… 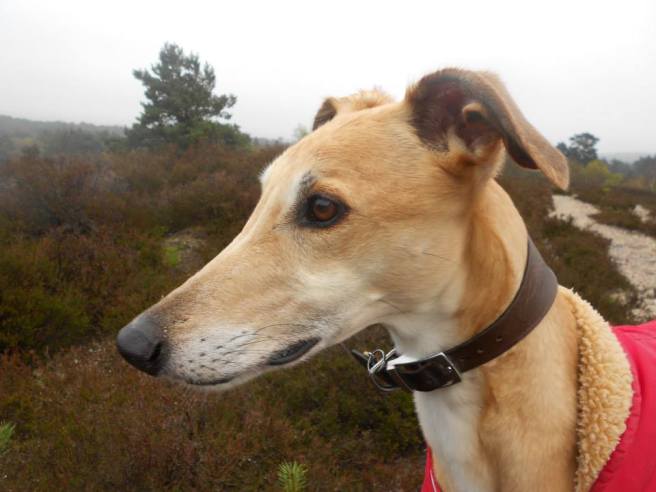 We are both anti-social. Well, to be fair, we are probably better described as asocial, rather than anti. I’ve always been one of those people that get on just fine on my own. I don’t need other people and I’ve never felt lonely in my life. I often don’t really understand other people and sometimes feel life is simpler when I just avoid them. Skipper is like this with other dogs. Some bad experiences taught him that unknown dogs are best left alone. Therefore, he does not go out of his way to interact with strange dogs. He sticks by my side and gives me his wide-eyed anxious look. Don’t leave me, Mum. He literally doesn’t know what to do when he meets other dogs. Wagging his tail? Well, sometimes. Play? No, don’t be silly. He never stoops to that. He just wants to be left alone and well old boy, I can totally relate to that.

We both love to run. I started running when I was 17. I was fed up of being chubby and depressed and decided I was the only one who could do anything about it. I started running around the back fields of our estate. I’ve continued running whenever I can throughout my life. Granted, there have been long periods of time when I have just not been able to fit it in, but I do try to get back to it. With my youngest child now at part time at pre-school, I am currently getting back into it in a big way. Of course, Skipper is half Greyhound and half Saluki, so running is in his genes. He was born to run and in his younger days, he used to make the earth shake when he took off. Oh, what a sight. Absolutely beautiful. So much power and grace and passion. Sadly, he’s coming up to 8, and a quick, mad dash here and there is all he feels up to these days. When I run, he keeps up a pleasant trot as if to humour me. But every now and then, if his amazing eyesight catches sight of a squirrel on the ground, he still surprises me with how fast he can take off, like a bullet from a gun, tearing up the dust, thundering out of sight. Beautiful. Never fails to make me smile. 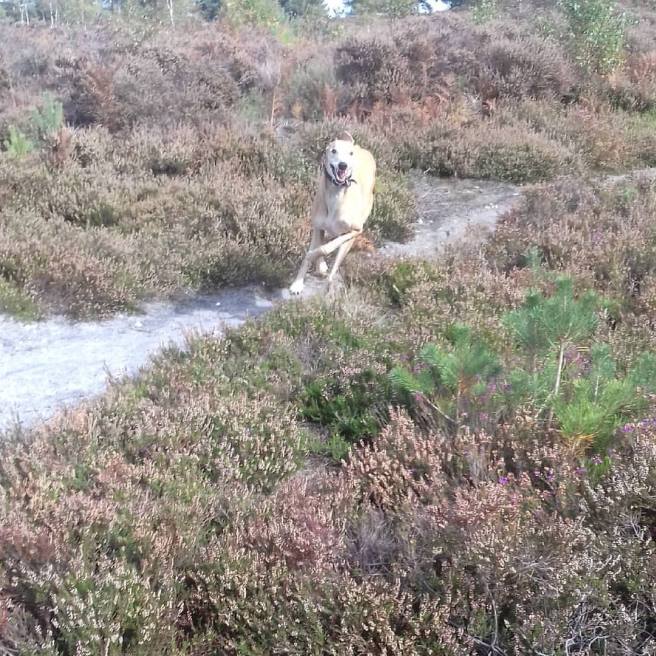 We know who we love. Skipper has always been a bit fussy about who he likes. He’s never been mean or aggressive, it’s just there are some people he’s not that fussed about, and there are some people he really, really, really likes. He likes them so much he announces their arrival with a high pitched, screaming whine. He greets them by turning in circles and knocking into them with his backside. He then makes sure they remember he is around by placing his head on their lap for fuss, and nudging their hand every time they dare to stop stroking. He can be very demanding, like that. I know who I like too. I have some very favourite people in my life. People I get very, genuinely and childishly excited about seeing. Funnily enough, I think they are the same ones Skipper loves…

We are very loyal. I like to think I am a loyal person. I don’t need a lot of people, and I’m kind of fussy about who I let in, but if I do make a friend, it tends to be a friend for life. I’m not too interested in superficial, small talk friends. I’d rather have a small handful of people I can truly rely on for deep and meaningfuls, and once I’ve found them, I’ll cling onto them, recognising how valuable and rare it is to find ‘your people’. There’s no doubt that Skipper is loyal. And most of that loyalty is given to me. If anyone else tries to walk him, he will pull them over to me. When he was a puppy, he once ran back home to me because my husband took him for a walk. Unless he’s having a mad dash, whenever I look down on our walks, there he is. His eyes are always on me. Like melted hazlenut chocolate. He has the gentlest eyes ever. We’re well and truly stuck with each other. There’s no one else would be able to understand him like I do, and vice versa. 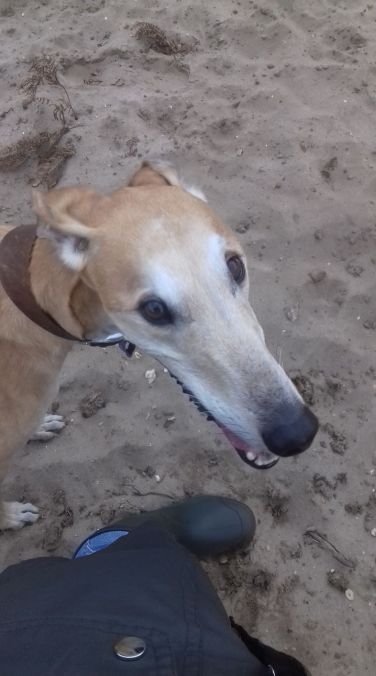 We have a naughty side…Well, who doesn’t? No one’s perfect, right? Skipper can be very, very naughty. He is a terrible thief. (It’s a lurcher thing.) He has grabbed legs of lamb and run up the garden with them, eaten an entire 2kg tub of margarine, entire fruit crumbles, cakes, a batch of freshly baked scones, entire contents of my fridge once when it got somehow left open…the list goes on. There is nothing he won’t steal. Though we do joke, if there is something Skipper won’t steal, then it must be truly vile. He has a sensitive tummy though, so quite often the results of his thievery end up in steaming puddles all over the house, which is usually how we know he has stolen something. He will also raid the bin. We don’t have a bin anymore but do put rubbish in a plastic bag on the side. Never ever make the mistake of putting even a crust or a crumb into that bag! He will wait until you are not around (he never steals when we are watching!) and he will happily tear the whole bag to shreds and scatter the rubbish all over the floor. Skipper also cocks his legs on things from time to time. He is house trained. He can even open the front door by himself from both sides, so is able to let himself in and out for toilet time. It’s just that every now and then, for no explicable reason, he likes to piss over something in the house. He has over the years, been a truly naughty boy. But I’m no angel and sometimes I think we deserve each other. I’m one of those people who is slow to anger, but once I blow I really blow. Everything will come out all at once in a pretty childish temper tantrum. I always end up regretting it afterward, and it would be much better if I mentioned things as and when they annoyed me, but there you go, none of us are perfect, but sometimes I think we expect dogs to be. 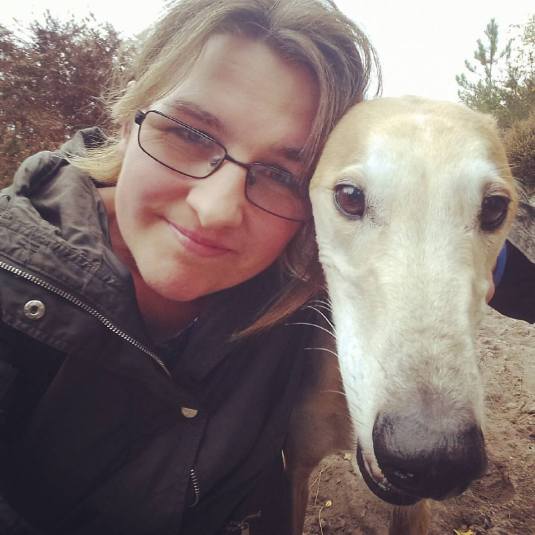 We are creatures of habit…Skipper has the most amazing internal clock. My other lurcher Tink will come running if she hears the food bowls clattering, or her lead being grabbed. She might show up if someone is home from school or work. But Skipper knows exactly when things should be happening, and he never lets me forget. He has his cues. The front door opening in the morning means breakfast. Between 9am and 10am is first walk. Don’t even think of going past 10am. He will follow me around the house with big, sad eyes. He will sit down right in front of me if I have dared to put on the TV or pick up a book. Every time I turn around he will be there. Staring. The same thing happens around 12pm. Lunchtime, obviously. Then anytime between 2pm and 3pm, he is on high alert. Second walk. He won’t settle. Every time I say ‘right’ he thinks it’s the off. Runs like a lunatic into the front door. Again, he will follow me around, tripping me up. Once home, it’s window watching time. He sits on the bottom stairs and has a good view of the front gate. He’s waiting for the kids to come home one by one. Yes, he loves them and wants to greet them, but what he’s really after is the leftovers from their lunchboxes. He won’t go away now until after his dinner, followed by ours. He will be there like a massive lump, long, gangly legs in the way, hopeful eyes, getting trod on and bumped into because he just won’t go away until every little crumb is extinguished. Bless him. Then it’s back to bed. As for me, I have to admit I am not the most spontaneous of people. I like to have my week planned to a degree. I write to-do lists and can’t survive without them. My life is arranged by time slots and I really have no say in it. School run, school pick up, dog walks, dinner. You know how it is! There is a degree of comfort in the familiar. If someone was to turn up at my house unannounced, I honestly don’t know how I would cope!

So, there you have it. I might not exactly look like my dog (I look a lot more like the other one. The scruffy one!) but I do think we have become very, very similar. For this reason, I just get him, and he just gets me. That’s the beauty of owning a dog. Total acceptance.

What about you? Are you a dog person or a cat person, or are you owned by both? Do you think you and your pet are alike in personality? Or maybe looks? Please feel free to comment and share! 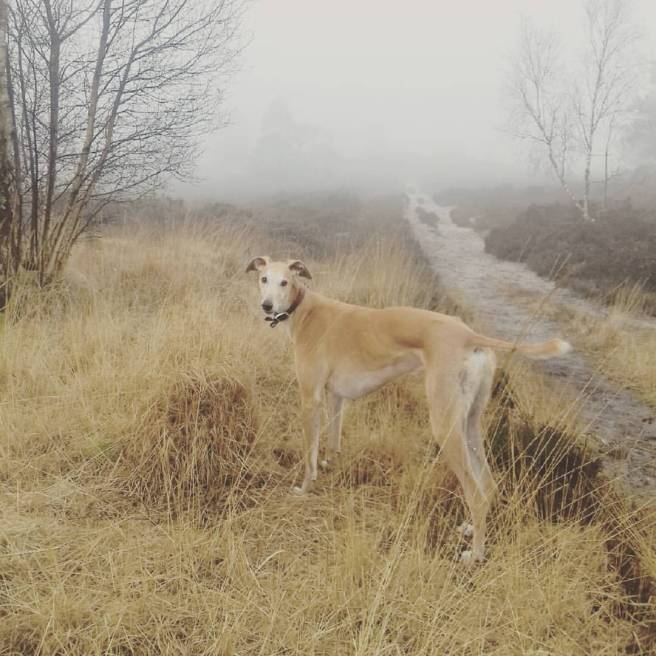 And In Your Place, An Empty Space… (another one flies the nest.)

Addicted To Writing Or A Maladaptive Daydreamer?