I remember standing outside school when I was about four or five, trying to understand why I was only me. Why my thoughts and feelings were limited to just mine. I looked at my friends and my mother, and stared into their eyes, and realised I could not climb into their heads and become them, I could not occupy the space behind their eyes and see the world as they did. I vividly remember thinking how amazing, strange and sad this was.

But I soon found out that this does not really apply to writers. If you are a writer, you are not limited to being just one person or living just one life. As a writer, I discovered that I was never just me, and I was also never, ever alone. When I started to write stories, they were about animals, lost and neglected, looking for love and embarking on adventures. I became them. I was them, just as much as I was Chantelle. I had to quieten them and hide them when people asked something from me. I had to climb back out of their minds and fully inhabit mine. But I would try to get away with not doing this in full. I’d be eating my dinner, sniffing the air, sure I had picked up the scent of trouble, my eyes darting from side to side, planning an escape. I wasn’t just me. And then when dinner was over, the stories would continue and I would slip back into character. 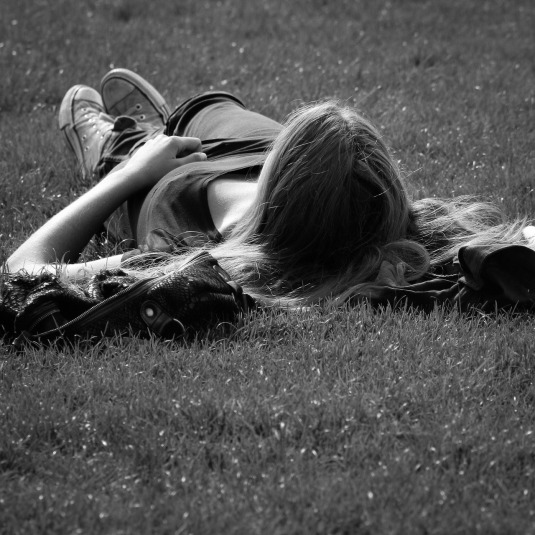 Throughout my life, I have been all the people I have written about. I have not simply created them, written their stories and then cast them aside. It doesn’t work like that at all. These people come to me, somehow, for some reason. They start off small and grow bigger and bigger, louder, more complex, more real. They are all from me. It blows my mind. It’s like they find me and ask me to tell their story, but that’s not really it. Somehow, they come out of me, because they are me.

And then I am them. I become them in order to write their story, in order to feel what they feel, and do what they do. I don’t really know how I do this. I just think about them so much, picture them, hear them, study them. I lie awake at night, and they are there. Characters from books already written, and characters still developing in my head for future books.

Danny (The Boy With The Thorn In His Side)is still the most constant visitor because he has been in my head since I was 12. We grew up together. Me, lying in bed, watching him in my head. Hearing the words I put in his mouth, though it never felt like that, it always felt like he was the one saying them. His story is an action-packed tragedy of violence, music and friendship that plays out endlessly inside my head, even now. I lie awake and watch scenes that exist. Then I see new ones, ones that happened in his life, but never in the actual book. He’ll never go away. He is me. As are the other characters in that book. It still slightly concerns me how easy it was to climb inside the twisted mind of Lee Howard. How I was able to understand and even empathise with his warped motivations and desires.

Others come and go. Lou (The Mess Of Me) is another fairly constant visitor. This is because she is the one most based on myself, on my life and my thoughts and feelings. Her story, like mine, is not over yet, and until I get around to writing her sequel, she whispers in my ear on a regular basis. We share the same dark thoughts and our worst enemies are ourselves.

If characters are still waiting to be fully told, they will talk a lot in the day. Walking down the lane, I listen to Reuben and Chess, the characters from a YA series I am planning. They have conversations constantly. When I least expect it, they pop up and start talking or arguing. They are helping me to write the book.

The same goes for current ones, characters from my works-in-progress. I learn new things about them every day. I will be washing up or making dinner, and suddenly there they are, having a conversation that just needs to be written down. Because of these people, I am never, ever lonely. I don’t know what it feels like to be bored or alone. Because of them, I don’t know how to have just one train of thought in my head. I don’t know how to have a quiet mind.

Yet, to those that know me, I am often described as quiet.

Sometimes I think the people in my head are the best thing about being a writer. Creating worlds and weaving plots, sharing your work with readers, getting reviews, these are all fantastic, magical things, but being more than one person who is never, ever alone, has to be the best and maybe the most unexpected.

The Old Friend – A Collection of Tales and Poems is out today!!

Disconnected (everything is a bit shit…)

The Mess Of Me was my debut novel back in 2013. It deals with some gritty issues such as eating disorders and self harm but it's also about two sarcastic cynical best friends who may or may not be in love with each other. 😍Available in ebook and paperback! #gritty #drama #familydrama #firstlove #eatingdisorders #selfharm #summerread #youngnarrator #youngadult #YA #YAfiction
Good morning! Storm clouds brewing here so it looks like more rain. I'm about to run a Zoom writing club then I've got another school o E this afternoon. What are you up to today? #writersofinstagram #authorsofinstagram #writerlife #walking #dogwalking #nature #beautiful #morning #selfemployed #communityinterestcompany
It's coming soon!! The first in a darkly gripping YA trilogy about two lonely teens and the hidden powers within them. Ebook available to preorder now! #yournextread #yournextbook #fiction #trilogy #yatrilogy #YA #YAfiction #YAseries #YAparanormal #YAsupernatural #YAsuperpowers
So, I wasn't supposed to be working on either of my first draft WIPs, as I need to focus on the other books nearly ready. That was easy for a bit as I was a tad stuck on both WIP, but then, inevitably, a break from them got the cogs spinning again and now I'm unstuck. On both. It's okay though, I'm allowing it. No point trying to drown it out when it gets loud. Also, I've done what I needed to for the nearly ready books, ie sending to betas, or proofreader etc. So I'm allowed! #writersofinstagram #authorsofinstagram #writerlife #writing #addictedtowriting #ilovewriting #amwriting #workinprogress #longhand #notebook #wip #firstdraft #YA
A gritty YA trilogy about an unsolved murder, a neighbourhood feud and a teenage singing sensation on a downward spiral. The Holds End trilogy is available in ebook and paperback 😊#youngadult #YA #YAfiction #fiction #familydrama #firstlove #crime #murder #trilogy #nextbook #nextread #yatrilogy
I wrote a flash fiction piece about my favourite place 😊#flashfiction #story #shortstory #writersofinstagram In the old tradition of claiming land when it becomes available and no others remain in a position to contest such claim, we took the common as our own after the world fell. All 33 hectares of it were now ours and we strung up fences and wires and warnings for others to stay out. Because the establishment fell with everything else, it belonged up no one but itself yet it needed guardians, protectors and who better than us, who knew every inch of it, every secret path, every copse, every field, every hill, every fern, every route? We took it because there was no one to stop us. And all that was left of humanity were the remnants, the dregs, like us, tattered and scattered, scratching to survive. We walked the perimeter every day, twice a day, hunting, gathering, growing and guarding. The remains were no threat to us or our will to survive, but we would fight them to a bloody death if we had to. In the summer we built our camp in the shallows where the grass was always green, and strangers could not see our fires. In the winter we sheltered on the hill among the trees while the shallows flooded, and we could see the world from there but the world could not see us. Surrounded, protected, shielded by heather, gorse, ferns and bramble, we let the firs grow, we let the forest return, we would never run out of firewood or prey. Our land, we scrambled and scurried and dug ourselves in to survive. Our land now, the young ones, feral, fiercely they roamed the edges keeping watch. And our hair grew long and our skin grew thick and our roots drove deep into the land to tangle with the earth. Our land now. The signs are painted in blood. Stay out.